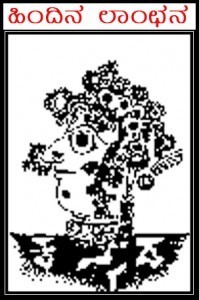 This logo is an illustration of  a puppet  used in "Togalu Gombeyata", a type of shadow puppet show unique to the  state of  Karnataka. The puppets ("Gombe") are made of leather (Togalu) and the  facial  features are drawn with colorful dyes extracted from vegetables. The  characters  in the show are traditionally from Indian epics such as Mahabharata and  Ramayana. The dialogues are rendered either as spoken conversations or  as songs  or a combination of both, and accompanied by music with local  instruments such  as harmonium. This traditional rural theater, which was used very  effectively  to popularize stories from Mahabharata and Ramayana and to spread the  moral  values upheld by various characters in these epics, is now on the decline due  to a competition from modern forms of arts such as movies.
A shadow puppet show very  similar to Karnataka's  Togalu Gombeyata, and known as "Wayang Kulit", is popular in Indonesia.  It is  believed that this traditional art was introduced to Southeast Asia  sometime in  first century CE by traders from south India. The puppets in this show  are also  made of leather and the stories are based on characters in Mahabharata  and  Ramayana. UNESCO has designated Wayang Kulit as a "masterpiece of oral  and  intangible heritage of humanity" and obtained assurance from Indonesia  to  preserve this heritage. The logo of Kannada Sangha (Singapore) is thus  symbolic  of the traditional cultural link between Karnataka and Southeast Asia, which is  in a way being revived and continued by the Kannada Sangha (Singapore).
"Singara" is the name we chose  for the  website of Kannada Sangha, which was the first Kannada Sangha in the  world to  have its own website. Singara is also the title of the magazine that  Kannada Sangha  publishes periodically. Over the years, the word Singara has become  synonymous  with Kannada Sangha (Singapore). Singara literally means decoration or  adornment.  The illustration in the logo is also an exquisitely decorated face of a  woman  and hence an appropriate logo for Kannada Sangha (Singapore).
This wonderful art was originally written by Shri. Chandrakanth Acharya. In 2010 the logo was re-written by Smt. Rashmi K.C and converted to Digital format by Shri. Rajesh Hegde.
During 2011 AGM, the new logo was officially re-launched by
Founder , Ex-President of Kannada Sangha (Singapore)
Prof. A.N.Rao
Prof. B. Venkatesh
14 June 2011